For the record: BAE Chair – like Pontius Pilate – failed to clean his hands

A reader draws attention to an article in the latest CAAT magazine, which opens: “Like any company chairperson, the Chair of BAE System, Roger Carr (right), likes to use the AGM as an opportunity to celebrate the year’s achievements.”

Lizzie Dearden (Independent) summarised the dialogue: BAE Systems does not know whether its weapons are used to commit war crimes, the defence firm’s chairman has admitted while – inconsistently – praising its impeccable record on values.

Asked whether any of its products were used in an airstrike that recently killed at least 20 people at a wedding, including the bride, he replied: “You don’t know and I don’t know.” Statistics on the appalling pain, death and destruction inflicted on Yemeni citizens and their homes may be read on the CAAT site.

Sir Roger later admitted that BAE Systems equipment “may have been used” by Saudi forces in a military intervention to crush anti-government protests in Bahrain in 2011.

Monitors allege that weapons and aircraft manufactured by BAE Systems have been deployed to kill civilians and violate international law in Yemen, but British exports to Saudi Arabia have continued, with the UK licensing more than £4.6bn worth of arms to the country since the bombing started. “We supply equipment government-to-government to enable the job to be done as seen fit,” Sir Roger said in Farnborough on Thursday. We separate ourselves from the war itself… we’re not involved in any part of prosecuting, planning or executing the war.” 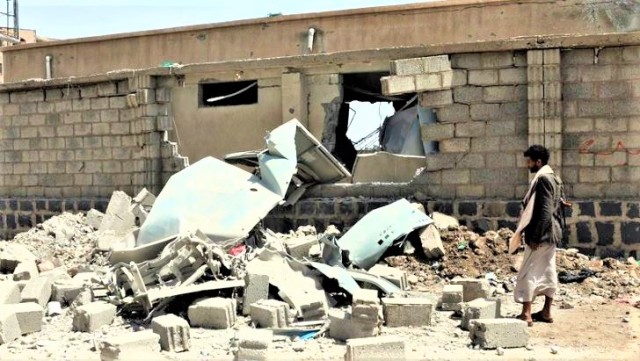 While being repeatedly questioned about civilian deaths by supporters of the Campaign Against Arms Trade (CAAT), Sir Roger claimed that BAE Systems hoped for peace in Yemen and other countries, adding: “One death of anybody is one death too many.”

But he later refused a request by the Reverend Matthew Harbage – who once turned down a trainee scheme at BAE Systems after graduating in computer science – for a minute’s silence to commemorate the people killed and injured by his company’s products, then had a protester who accused the firm of being “complicit in the murder of innocents every day” carried out by security guards.

Sir Roger defended Saudi Arabia’s intervention against Houthi rebels in Yemen by claiming the coalition bombing campaign was supported by the UN Security Council, although the body has never explicitly backed military intervention and has issued several warnings over violations of international law. He argued that Saudi Arabia needed to protect itself from Houthi missile attacks, adding that Yemen “may breed difficulty as all wars do but the greater difficulty is to let the infection spread and do nothing about it”. 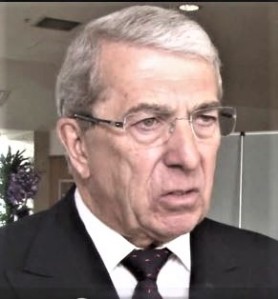 Sir Roger (left) insisted that BAE Systems staff do not load weapons on to planes themselves but are involved in service, maintenance and training. “It is only at that level we draw the line, the use of that equipment is for others,” he added.

“We are not an aggressive company. We don’t conduct wars, we manufacture equipment in order to ensure that those who protect and serve us are equipped appropriately and hope that having given that equipment it will avoid others being aggressors.”

Matthew Harbage said BAE Systems could not “abdicate all responsibility” and Andrew Smith, who attended the AGM with other members of CAAT, said BAE Systems’ weapons made it an “active participant” in any atrocities committed in the conflicts where they are used:

“BAE’s arms have played a central role in the bombardment of Yemen, Carr and his colleagues cannot simply abdicate themselves of responsibility for the destruction that has been caused. If BAE is actually interested in stopping the terrible consequences of war, then the least it could do is put procedures in place to monitor the use of its weapons and ensure that they aren’t being used against civilian targets”.

He added: “The reason that BAE doesn’t know if its weapons were used in the bombing of the wedding in Yemen is because it doesn’t want to know. Its entire business model is based on perpetual war. To ask questions or to take any kind of moral stance would be to jeopardise its position as a major arms exporter.”

BAE is supplying Saudi Arabia with aircraft that are bombing Yemen. Many will agree with the understated comment: ”We at CAAT don’t think that is much if an achievement”.

In May, two Court of Appeal judges, Lord Justice Irwin and Lord Justice Flaux, granted permission for Campaign Against Arms Trade (CAAT) to appeal against a High Court judgment which allows the UK Government to continue to export arms to Saudi Arabia for use in Yemen.

4 Responses to For the record: BAE Chair – like Pontius Pilate – failed to clean his hands